The Hamsa Chakra gives you discretion. 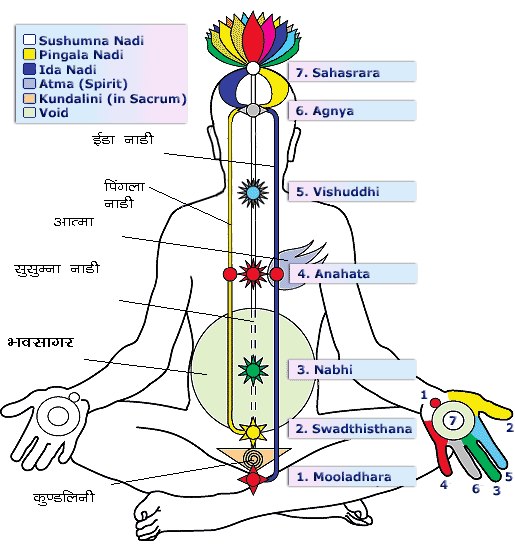 In the Gita, Shri Krishna has described the area as Kshetra, and the one who knows the area is called as Kshetragna. Gna, yesterday as I told you, gna or gya, means: “The one to know on your central nervous system”. So the one who is the knower of that area is the Kshetragna. Today we are going to know about the Hamsa Chakra. That is the area of, between the two eyebrows, bhrukutis, they are called as. This one is placed at the base of the brain, which is called as murdha, and this part is the complete controller of the whole of the base of the brain, again I say, base of the brain. And that is a part of the Vishuddhi still, which is an extremely important center as far as the human awareness is concerned, because these two nadis, Ida and Pingala, before entering into Agnya and giving, crossing each other, part of them crosses over this Chakra of Hamsa.

So when the ego and superego develop in our brain and cover our limbic area, from both the sides the strands which are coming out of the Vishuddhi sit on them. So they also control these two institutions from outside.  For example, it crosses like this, goes up like that from Hamsa, and then – some strands. Then the others go up again and cross like this, and form ego and superego. So from the back side, on top of them, these two strands go and sit. You all know that Hamsa Chakra gives you discretion, but still we do not understand, what do we mean by discretion?…

So the discretion is that Guru is Parabrahma – any guru, Satguru. […] So you understand how important it is if you are the disciple, if you are blessed by your Guru. ….. but I say not only that you are My disciples, but you have got your realization, you are Sahaja Yogis. You got all the powers. You know each and everything. You are so special people. For such people there should not be any difference of opinion, because you know the same thing all the time, so there cannot be any fight, there cannot be any quarrel, there cannot be any argument. But the discretion should be that our Guru is a Mother. She’s very mild. She’s very gentle. She’s very kind. I know that. [……]

So there has to be the self-disciplination, as you can so call it, on the Hamsa Chakra, which is the one which knows what is right, what is wrong, through which we work it out; whatever is the right – that’s all we do. Otherwise we don’t do whatever is wrong….

*To experience realization through Sahaja Yoga Meditations at free of cost, Seekers may visit http://www.sahajayoga.org or any other Sahaja Yoga website and TV channel.