Whether you are a vegetarian or not makes no difference to your meditation. 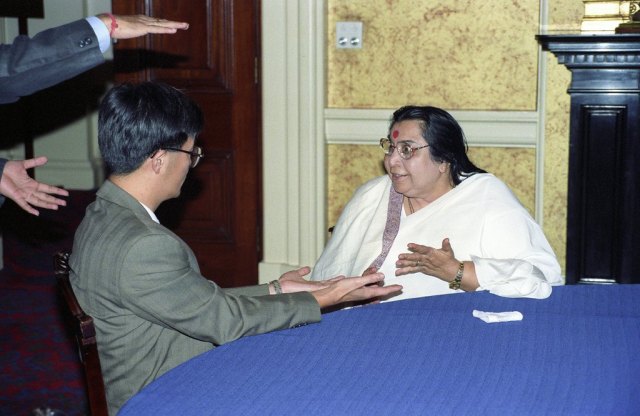 ….whether you are a vegetarian or not makes no difference to your meditation. But for people, you see, the food is only important because supposing you’re Chinese, you eat too much of fish and all that. So to give it a balance, if you become a vegetarian more you’d be better.

It’s a question of balancing, but those people who eat too much of, say, vegetarians, like in India, they should take more to non-veg, or to proteins; it’s a question of carbohydrates and proteins, it’s not question of vegetarianism. Now to say that Buddha was vegetarian is not true; it’s false. Because how Buddha died, you know? Buddha died when he went to a disciple who had killed a wild boar, and the wild boar is allowed to leave for some time and then you should eat the meat. But he was in a hurry, so they didn’t do that and he ate it and he died.

Now the problem with all of you is one, always, like whether you’re Christians or Buddhists or anything, you’re all conditioned background. …So why be so much conditioned by Buddha? Buddha was never, never was a vegetarian; he died because of that. He ate that meat and he died; so it’s a wrong idea that Buddha was a vegetarian. It’s all myths they’re going about and there is no need to be vegetarian; if you are suffering from too much of protein intake you should take to vegetarianism. It’s good for you if you have that problem, and in China eat so much of, say, fish. So they should take more vegetables with it, not only the fish because with fish you have phosphorous.

Now do you know about your genes, we have a database of the genes. There are three things, carbohydrates, there is phosphorous and there is nitrogen. Nitrogen is good for your health, for your ascent, for everything. But what happens? People eat too much of proteins and fish and all that; then they create more phosphorous, they become very right-sided, their eyes are spoilt and the whole balance is lost. Do you follow the point? The balance is lost; so what you have to do… So the people who are eating too much of phosphorous must take to carbohydrates. So it will suit some people who are eating too much of proteins or too much of phosphorous should take to more vegetarian food, will help; but it’s not the way we should judge it we start by taking vegetarianism will become a realized soul, you cannot………