All things which were mythological are true; all the things that are intellectual is not true. 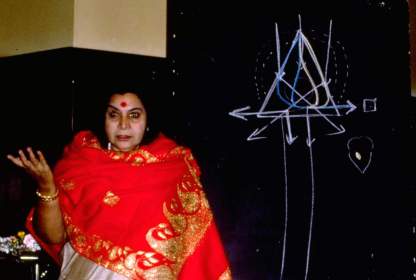 …
So many names have been described of the Goddess: specially Adi Shankaracharya called Her Raja Rajeshwari, meaning She’s the Queen of all the Queens. Also for Mother Mary they have used this title in the West. These ideas have come from the pagan religion, as I have told you before, and that they didn’t come by the description of Mother Mary in the Bible. That shows that there has been lot of changes into the script of holy Bible. Also there has been lot of changes in the script of Indian scriptures, even Gita. And that’s how the derailment in every religion started.

And the intellectuals took advantage of it and started projecting their own idea, saying things, describing things which were absolutely against divine Power. You are all very fortunate people on this Earth that you have discovered the reality, and you see that all these things which were mythological are true; all the things that are intellectual is not true; also whatever are used for the purpose of dividing people from each other are not true. Because we believe in all the religions, that’s why every religious person, so-called, is against us; because you are supposed to believe only in one religion and fight all the rest.

*To experience  Sahaja Yoga Meditations at free of cost, Seekers may visit http://www.sahajayoga.org or any   other Sahaja Yoga website and TV channel.