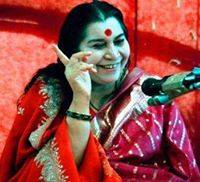 , that is, eleven Powers of Destruction. These Powers have their centres located around the cranium of our head. When the Incarnation of Kalki takes place, all these eleven Powers perform the work of Destruction. Out of these eleven Powers one is that of Shri Hanumana, the other of Shri Bhairava. In the Bible, these two Powers are named as Saint Gabriel and Saint Michael respectively. After Self-Realization in Sahaja Yoga one can awaken these Powers by addressing them in Sanskrit, Marathi or even in English. . . .
The aforesaid matters can be verified by any person after Self-Realization in Sahaja Yoga. The purpose why I am telling you all this is to impress upon you that it is absurd to quarrel against yourselves after groupings as Hindus or Muslims or Christians. If you could see the principle behind all this, you would realize that all these saints are like many flowers on the same Tree of Religion, and are all connected with each other because of the One and the same Power.
Perhaps you would be surprised to know that in Sahaja Yoga the awakening of the Kundalini very much depends on the condition of the Agnya Chakra of the seeker. In the present age many persons are found with highly inflated ego. That is because most of them lead an extremely egocentric life. It is on account of the egotistical attitude that man falls from True Religion. Man is misled, and therefore remains continuously busy working, thinking, etcetera, which are complimentary to the growth of ego. Jesus Christ is of great help for securing freedom from the ego. As Paigamber (Prophet) Muhammad wrote about awakening of the Kundalini and the ways of protecting oneself from wicked powers. So also Jesus Christ told in very lucid manner about the Powers in us as well as the weapons. . . .
Jesus Christ possessed a number of Powers and that He was endowed with the Powers of Ekadesha Rudras. Then how is it that He was crucified and could not save Himself from the dreadful event? Jesus Christ, with His several Powers, could have completely annihilated His opponents in a moment. His Mother, Mary, was none else but Adi Shakti, the Primordial Mother Herself. She also could not bear the atrocities on Her Son. And yet it happened. Perhaps God desired to stage a Drama. Really speaking, Jesus Christ was beyond happiness or sorrow and He had to enact the Drama in perfect and faultless manner. . . .
Agnya Chakra is very subtle. The physicians are also unable to notice it. There is a very subtle door in this Chakra. That is why Jesus Christ said, “I am the Door.” Jesus Christ incarnated on this Earth for facilitating the passage through this Door, and He Himself was the first to pass through it.”