First, I will speak in Hindi language and then in English. We are such a cosmopolitan people that I don’t know what language to take to. [Shri Mataji speaks in Hindi] …………. 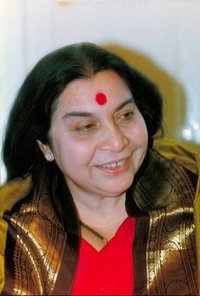 (English Text….)
I am talking to them about Shiva’s worship – what should happen to you. But today, I am going to tell you about the internal happening within us when you get your realization. There are eleven rudras placed here – eleven rudras. They are particles, we can say, anshas as they call it, of Shiva’s powers. And all of them try to take out, or to remove all the false ideas we have about life. When the Kundalini rises, they all get enlightened – eleven of them. And, say for example, Buddha had a part of that; Mahavira had a part of that. Now, all of them, what they do is to control us from falling into the prey of various things. Like, we have an ego. So, Buddha will look after the ego part. He will see that you get shocked by your ego. You will be quite amazed how you could be so egoistical, and so insulting, and so humiliating. But when this rudra is not awakened, when there is no light in this rudra, then what happens? You start justifying yourself. You think whatever you do is correct, whatever you’ve done, whatever you’ve said, whatever you have achieved, you think is your right. You’ve done nothing wrong. For that, this Buddha’s rudra has to be awakened.

On the contrary, if you go on pampering your ego, if you go on becoming egoistical, you become absolutely a right-sided personality. Once you are a right-sided personality, you know what all the symptoms there are of such a person. Now, for that if you just watch and introspect and see for yourself what ego has done to you, what wrong ideas you had about yourself. So that’s why Mohammed Sahib has said, “Beat yourself with shoes.” He didn’t know what else to tell. Because this ego business can really burst you, your head completely, and you may land up into so many difficulties. Ultimately, I have seen people developing this yuppie’s disease where the conscious mind becomes absolutely useless, cannot move. Consciously people cannot move. Unconsciously they will, but not consciously. And this disease is so horrible. A person becomes like a reptile. You have to carry them on your body. They can’t walk on their own. They can’t sit on their own. In a very young age this can happen. This is happening in America. Also, I have seen two, three cases here, in India, also such a thing is happening.

So if you do not try to see your ego and control it, and feel repentant about it. In Sahaja Yoga, there is nothing like repentance, we don’t believe in repentance. Because we believe that you all have got your realization. You are beyond any mistakes. It’s not true. We have to repent. There’s a, in English, there is a word – sorry. Sorry, for everything they will say sorry. Even telephone if you pick up, they’ll say, “sorry.” I say, “Sorry, for what?” But this sorry itself is very empty. It has no meaning. It has no depth. When you say “sorry,” you have to see why you are saying “sorry,” and what is to be corrected. This is a very big problem of today’s generation where people have developed such tremendous ego – because all our economic growth, all our industrial developments, all our big, big organizations, all of them have given us a way that we should all develop our ego. If we don’t develop our ego, we will be lost; we are nowhere. And that’s how we start pampering it, and then this right-sided problem starts. Then as a reaction, it goes to the left side.

Actually, in the head it is on the right side. Here is the right side ego comes up, so the left rudra is that of Mahavira. So people do things, which are sinful, which are wrong, which are against Shri Ganesha. Then also there are controlling powers of Mahavira, who controls. He says, “You will go to hell. This will happen.” He describes all the hell, all kinds of hell, that you’ll go to hell and you’ll be burnt alive – I don’t know, all kinds of things He describes to frighten you. But that doesn’t help. So people start getting more onto the left side and, I should say, through this rudra, when this rudra gets helpless, then a tremendous depression comes in. One feels very depressed. “Oh God. What a depression I have. I am so sick. I am this thing.” And then you try to frighten others with your depressions. You show sort of a, what you call, a emotional blackmail you do. All kinds of things you will do, and beat your head and do all kinds of things. Could be through ego, could be through this left side problem of the left rudra.

These two rudras are very important because they are directly connected with our left and right sympathetic nervous system. So, it’s very important to see that you don’t fall a prey to these rudras. These rudras are to be satisfied. So to be normal, at least look after these two rudras, which are: one is one who controls the ego, and another is self-pity. “I just can’t do it, I’m this, that” and all kinds of depression. All this works out into, physically also, into very serious problems like cancer. If the rudras are caught up, you develop cancer. But all this portion gets swollen up. It’s called as the medha. This all portion gets swollen up, and you can see a cancer patient having a swelling all over. At least would be here, or may be there. Because such a swing in the nature of a person that you can’t say from which rudra they have developed these psychosomatic troubles.

Psychosomatic troubles, all of them, come because the rudras have become ineffective. It can be due to the depressive nature or oppressive nature. It could be due to many other factors also. But all these factors are nothing but part and parcel of Shri Shiva’s, or Sadashiva’s powers. He is the one who is full of karuna – full of compassion. He is the ocean of compassion. If you ask Him forgiveness, He will forgive. Whatever you do, instead of feeling guilty if you ask forgiveness, then He forgives. But if you think you, whatever you’ve done is good, you’ve never tortured anybody, you have never made anybody suffer, then it knows. Shiva knows everything, isn’t it? And, because it knows, it starts giving up. So there’s a big combination of your will power to be there, and the combination of the blessings of Shiva. When the Shiva blesses you, your will power also heightens. But you must have full will power to know that you have to be of a higher level of personality. He was not at all a mundane type. I mean He was… supposing, ask Shiva to go to some party and all that, how will He look there? People will laugh at Him.

When I met some hippies, I said, “Why are you having this kind of hair?” So they said, “We want to…” They are all primitive. So he said, “I want to be primitive.” I said, “But the brain is modern. What’s the use of having primitive hair?”

So, deception; Deceiving yourself is not going to help. Best thing is to face yourself and understand what wrong you have been doing. If it works out, I tell you, so many Sahaja Yogis you are sitting here. If you correct yourself and become that, I am sure all the problems – political, economic, and all stupid problems we have – will be finished. But today it’s such a mixture, due to Kali Yuga, that even the worst people are carrying on.

Now, we have a responsibility to save this world. We have a responsibility to create a great, honorable life, which is not superficial, which is not just to show off. But inside it should develop so that this light of your spirit spreads and enlightens this world. It’s very important to understand all these troubles and these, I should say, diseases, psychosomatic diseases, and all other problems which are, in a collective way we can call, of the Kali Yuga like political, economic, all these problems – only are created by human beings. They are not created by the Divine Force. But Divine Force tries to neutralize them if there are many Sahaja Yogis who are practicing Sahaja Yoga in the real sense of the word. If that could be done, if that could be achieved, then I think we can do a lot, a lot for the betterment of humanity, and that’s why we have got realization. It’s not only for yourself, it’s not only for your family, it’s not only for your city or country, but for the whole world Sahaja Yoga is going to work out.

Now, if you have to do competition, you must only do competition in your ascent and in nothing else. But people are so superficial that they think by showing off or by becoming something – a big Johnny – they will achieve something of a very great level: is not so. It has to be a very humble attitude towards yourself also, so that you understand that whatever you are doing is for the betterment of global problems. Absolutely we can solve because you are the channels of the Divine. If I could do it alone, I would have done it. But I can’t, so that’s why I had to gather you all and to tell you that you become all the channels. But in the meanwhile, you enjoy. You enjoy life. Every second becomes a joy, which is also the gift of Shiva. Shiva is the one who creates this great admiration and great appreciation of every moment, everything that is there. And that is the state we have to achieve, by not condemning yourself, or not by pampering your ego, but by seeing what you are. That’s the main thing one has to see – what problem you have, and what is troubling you is yourself only. If you could just come to that point of understanding, I am sure, I am very, very sure that you will be such an asset to help to make this world look at itself and change. Because superficially you cannot change such deep rooted problems. And, you are being so blessed by Kundalini that you can really become a great torch, I should say, torch on the path of truth, love and joy.

May God bless you.